Shade UI is a free skin that can be used with LibGDX’s Scene2D. This will serve as a great replacement for your GUI in any game or app. 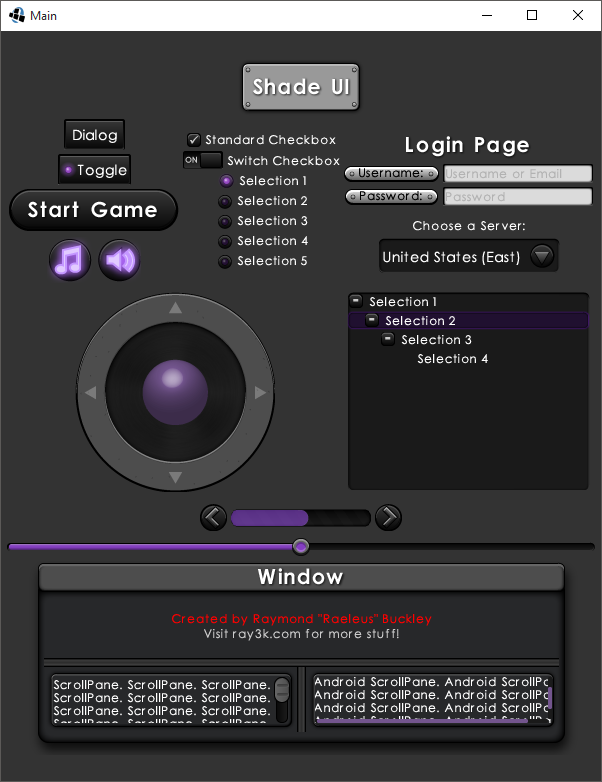 Commodore 64 UI is a free skin that can be used with LibGDX’s Scene2D. It makes for a great addition to any app or game that wants a retro feel.

Orange Peel UI is a free skin that can be used with LibGDX’s Scene2D. This is an extended take on your typical skin that employs a modern, minimalistic theme. 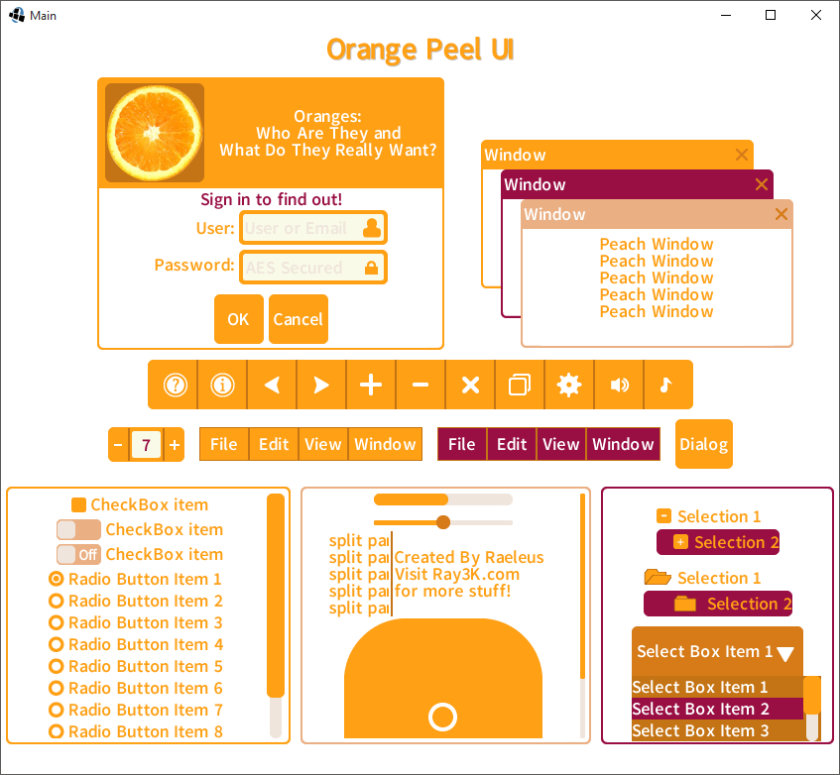 Relive the silver age of computing when operating systems were real operating systems! This skin has been inspired by the Windows XP OS. I created the images myself and they are not ripped from the source. This could be used as a fake desktop in a computer simulation or the base for something more advanced. 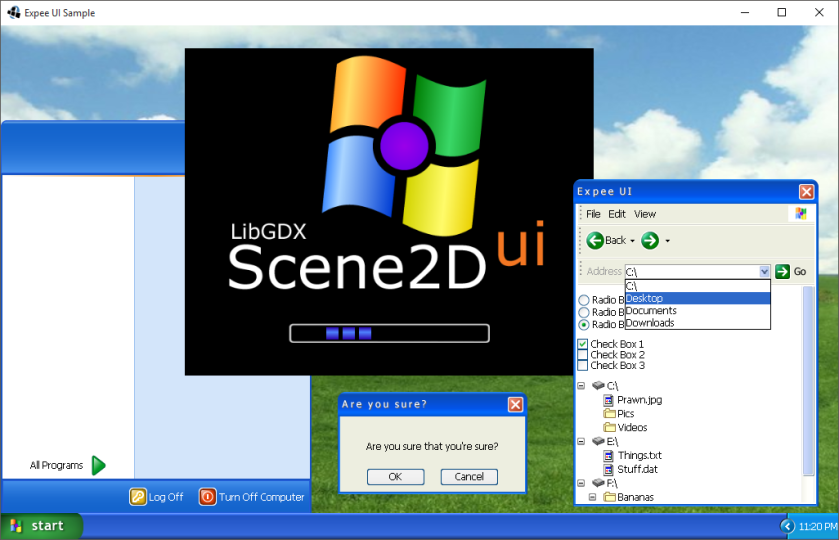 Hey Ripley! Check it out. This skin for Scene 2D UI is here to protect you! Star Soldier UI is a futuristic metal skin for your LibGDX games and apps.

Glassy UI is a free skin designed for LibGDX’s Scene2D UI. This clean, elegant interface makes for an excellent menu or dialog in your apps.

Ever want to make your own crappy version of Minecraft? Me neither! Well here’s a skin for those crazy enough to give it a go anyway.

The super-heroes have jumped off of the comic book page and into your app! Immerse your players in a graphic adventure with the Comic UI skin. Use the narration boxes and speech bubbles to add some pop to your cutscenes.

Hey, I get it. You’re tired of creating Swing apps for your soulless corporate overlords. That’s why you switched to LibGDX. But now you miss that mundane Metal Look and Feel that you were too lazy to change in the first place. Look no further than Metal UI to bring back the boring to your life! 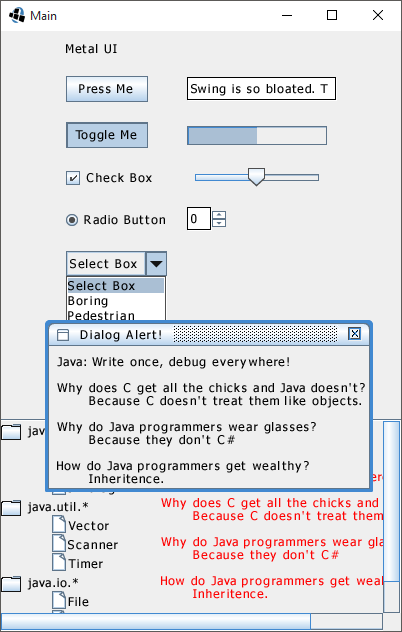 For that stylish, ornate look from a time long forgotten, choose Golden Spiral UI for your next adventure styled game.

The soft hum of turbines fills my ears as the FTL on the light jammer spins up. Suddenly, the pale glow of the display washes over my face. PROXIMITY ALERT! The glaring, neon letters are telling me too much….

They say robots can do us no harm. The so-called “Three Rules” protect us from such actions… I’m afraid that today is when we discover how naive we’ve been this entire time….

You might have heard about Cloud Computing, but let me tell you how to increase your Brand Potential while maintaining Synergy with your Clientele: BUZZWORDS. That’s right, Enterprise and Pop is what you’re missing. That and Cloud Form UI for your apps.

Did the creators of YouTube know what it would eventually devolve into when they created it? Would they still have made it if they truly knew? 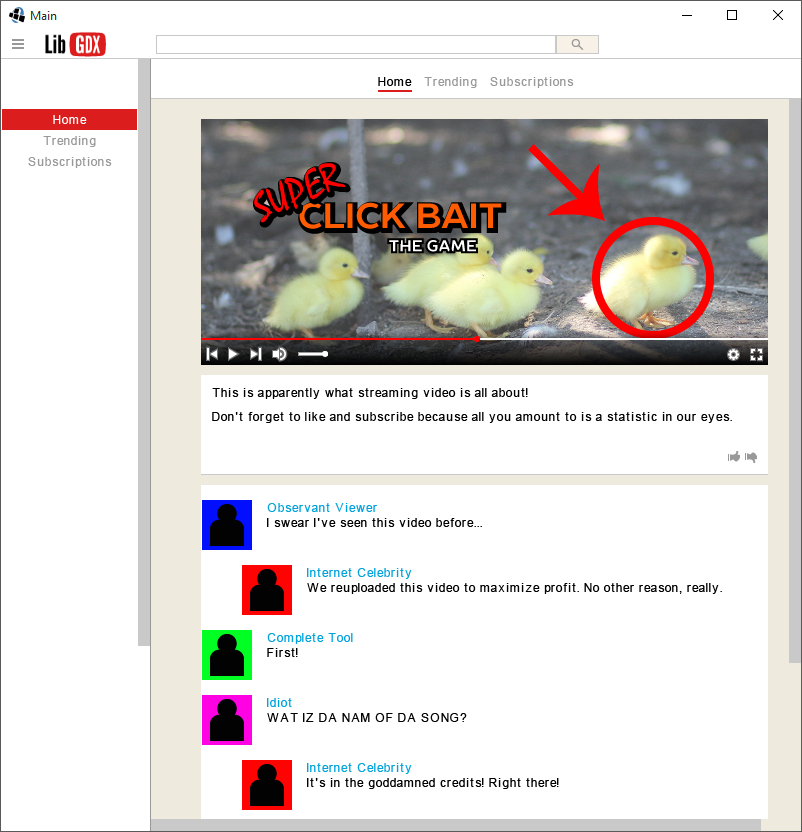 Dread Prince Pixthulhu awaits in the great depths of the ocean for his chance to rule the Earth! Help the ancient city of R’lyeh rise once again in this Lovecraftian Beat ‘Em Up UI. 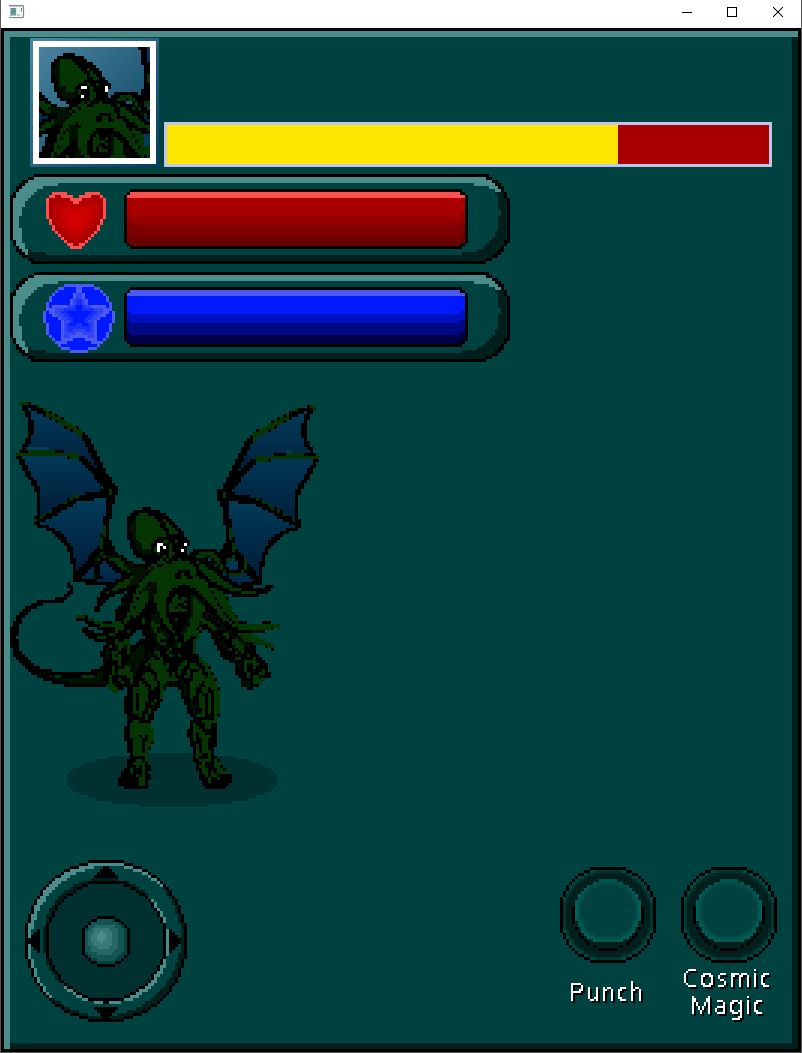 There is a realm of understanding that we are all familiar with. But the closer you look at a thing, the more we realize that the rules of our reality do not apply…

If they say cleanliness is next to godliness, then why is a clean desk a sign of a sick mind? 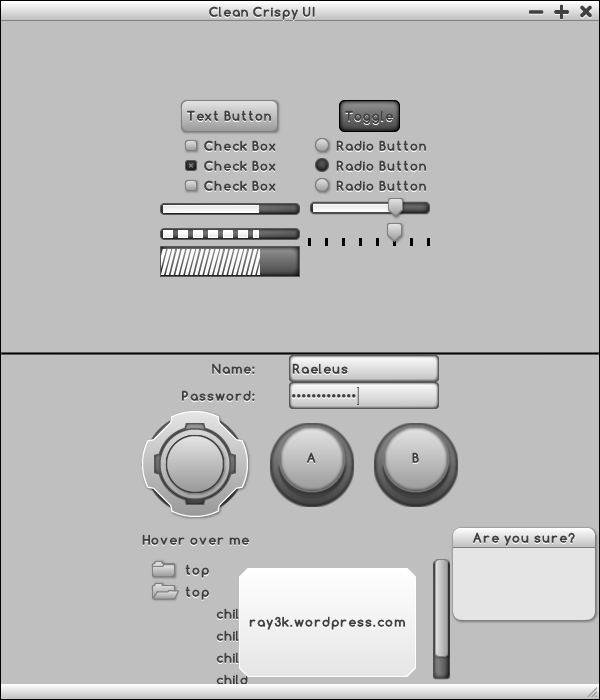 You might be an everyday kid from a small town, but destiny awaits you! Your team of super pals is the only thing standing between the Earth and stinky alien invasion in… TERRA MOTHER UI! 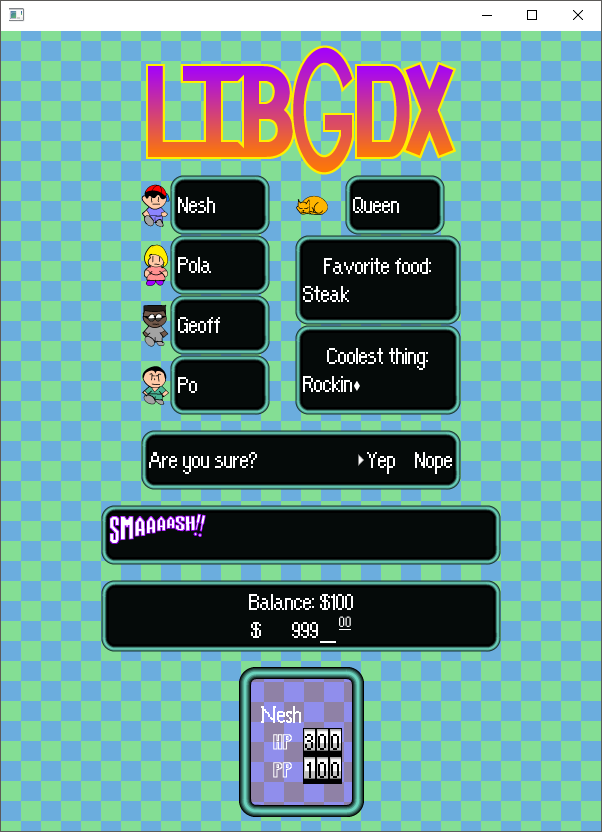 In a reality beyond our own, a fantastic world awaits! Help Buddy the Unicorn rescue all of his cuddly friends in Rainbow UI! 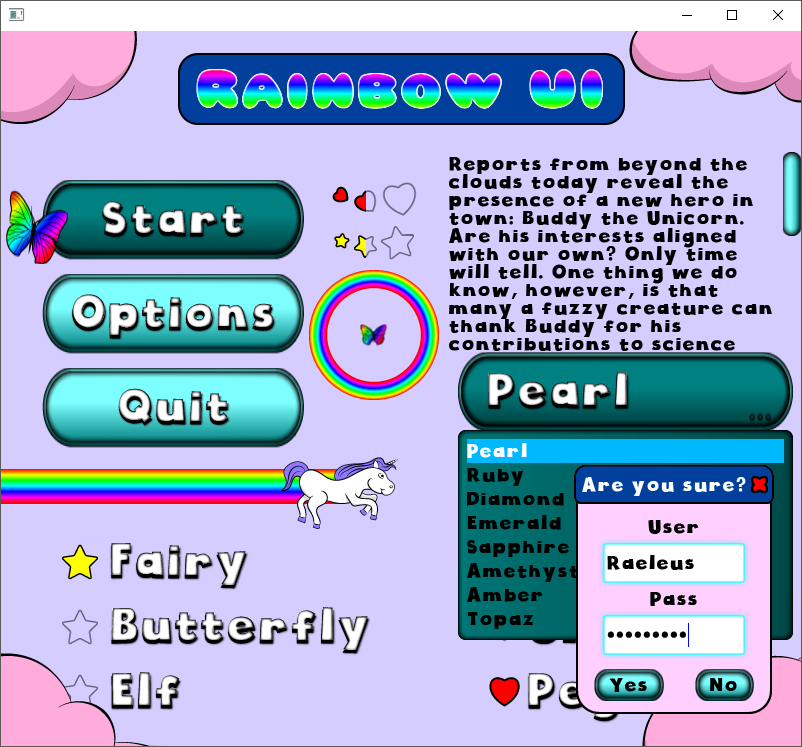 Someone left the freezer open again. Thanks a lot pal!

In the great tradition of M. C. Escher’s Drawing Hands illustration, I used Skin Composer to design its own interface overhaul. Now its available for your own software. Hooray! 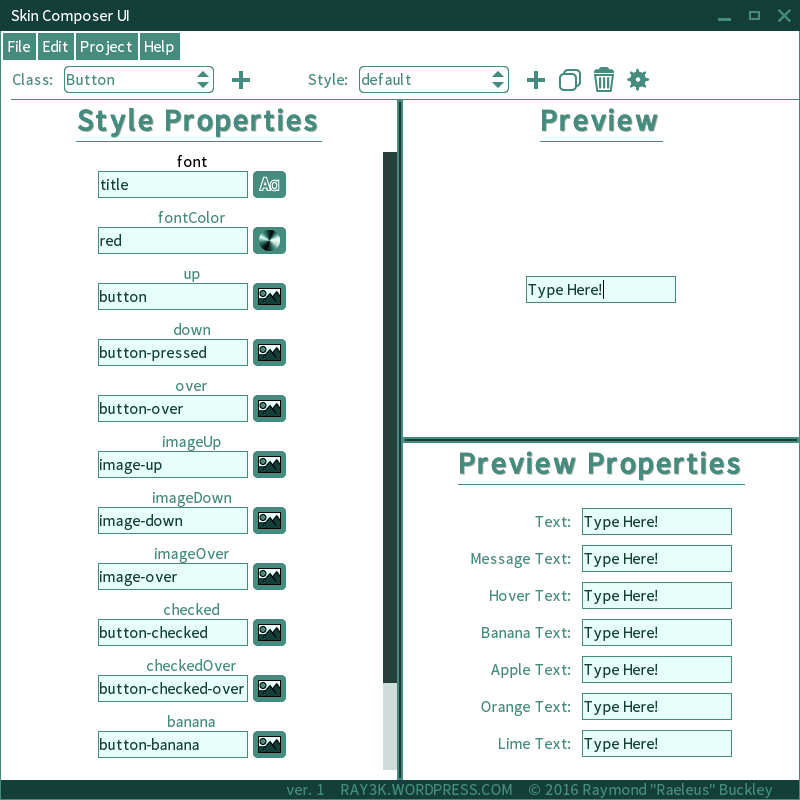 For the best picture quality, please adjust your tracking. Thank you. 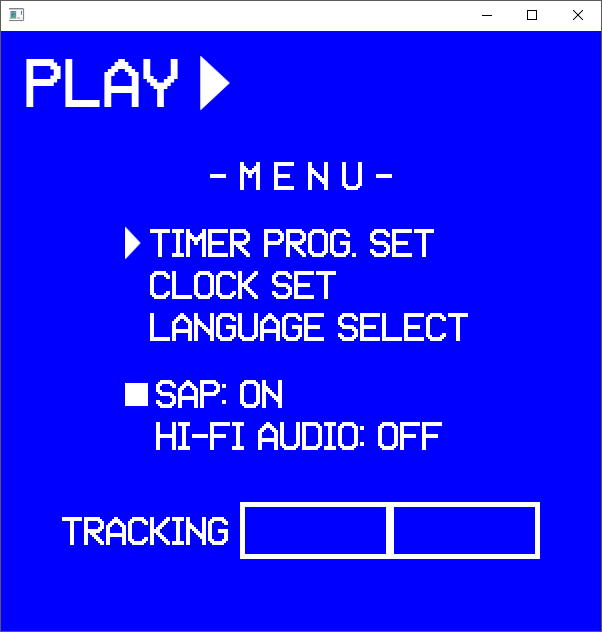 The report of the arcade’s death is grossly exaggerated.

Lights out. Maybe more than a dozen inside.
When the door’s down, blow the bulbs. To mildly go where some user interfaces have already been.

Level the playing field by leveling the plane on a plain, flat surface. A planar surface, that is.

To make time fly, throw your watch out the window.

The most scintillating monotone gray you have ever seen!

A skin designed for upcoming game Supergalactix by Betalord. Skin concept and specification by Betalord. Please watch this space for news regarding this game.

This skin demonstrates the use of Spine animations in Scene2D.UI. See SpineDrawable in the example code. This skin is free to use in the sense that I’m not charging anything for personal or commercial use. However, you must have a Spine license to distribute any software that uses the Spine Runtime. See the Spine License. 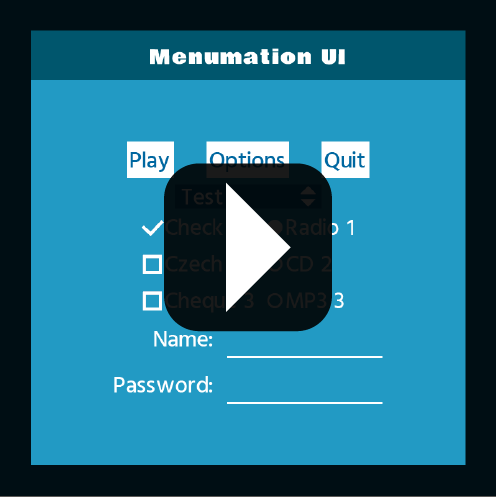 The number is spelled out so there is no argument about how to pronounce the product name in the common vernacular.

If you stop, you die. Ride on into the night.

Pen to the Paper UI Skin for LibGDX

Don’t just sit there! Get the pen to the paper and start producing!

The sanctity of this place has been fouled…

Pink is suave and sexy. 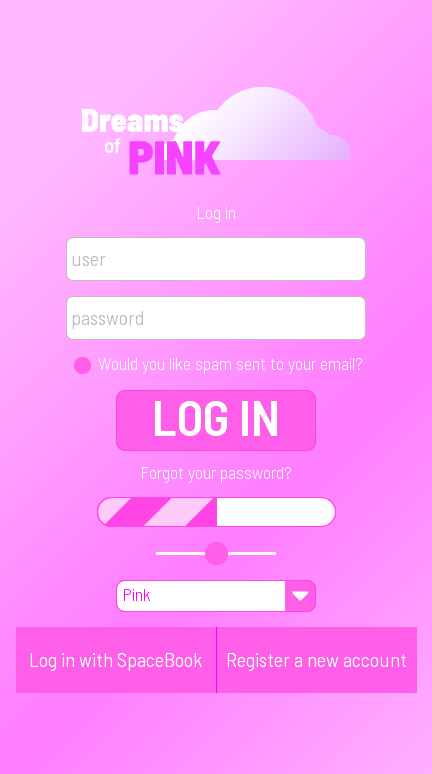 Tile Jigsaw is a fantastic puzzle game that really tests your problem-solving skills. You can relax and try a casual round or go in for a genuine enigma of a puzzle. Download it on the Play Store for free!

Tile Jigsaw UI is a reskin of the interface now available for you to implement in your own games. Thanks to MPuzzler for making Tile Jigsaw and allowing me to make this skin.

Particle Park UI is a user interface skin for the upcoming Particle Park. Feel free to use this in your own projects and spread joy to all the children in the land.

This showcases the benefits of using TenPatch in your projects. TenPatch is like a 9patch but 1 better. Actually it does a number of things including multiple stretch areas, gradients, tiling, scrolling, and animation.